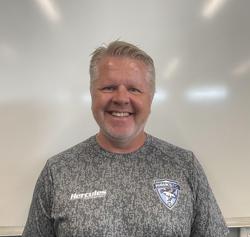 Experienced and forever learning youth soccer coach with great success in the development of teams, players, and people.

Successfully coached recreation teams progressively from U5 to U8/U10 age group in an environment that created noticeable and measurable development of players and teams.  100% player retention, and requests for consecutive coaching assignments.

Took over U17 team which was riddled with issues, leading the league in red cards and bottom of the league records.  Turned around culture and accountability to win USA league and several tournaments with no red cards issued for the year.  Composed U18 team with core of Newsome High School seniors who went on to have a very successful High School Season.

Successfully coached and trained boys academy program, which developed into one of the strongest teams in the state.  Won several tournaments, including Disney Showcase Tournament.  Coached U11 B team to a final 4 result in Region C Cup.

Successfully coached and trained 2 boys teams, one 1997/1998 team and one 1998/1999 team.  Coached 1997/1998 team from no win season to winning league and then winning Region C Cup in the course of 3 consecutive years and winning every tournament entered in final year, including Disney Showcase Tournament.  Coached young 1998/1999 team to Region C Cup semi-finalist in U9 year.